In late 2017, Powered for Patients Project Director Eric Cote had the privilege of meeting with leaders from FEMA and the U.S. Army Corps of Engineers (USACE) to learn about the challenges these agencies faced in addressing the temporary emergency power needs triggered by the unprecedented 2017 hurricane season.

The official FEMA and USACE After-Action reports, still being developed, will tell a more detailed story of the 2017 federal temporary power mission which saw the highest number of federal generator deployments in the program’s history. As this full story emerges, there will be many opportunities to document lessons learned that can help better safeguard emergency power in future disasters. Powered for Patients looks forward to contributing to this important work.

In the interim, Powered for Patients is pleased to share this preliminary picture of the herculean effort launched by FEMA and USACE to meet the emergency power needs of those impacted by Hurricanes Harvey, Irma and Maria.

Numbers at a Glance Behind the 2017 Federal Generator Deployments

In assessing the initial details about the federal temporary power mission triggered by the 2017 hurricane season, Powered for Patients looks forward to exploring these key questions with key stakeholders:

As answers become available to these questions, we look forward to sharing them. If you have questions beyond those detailed above that you’d like Powered for Patients to follow up on, please email Project Director Eric Cote at cote@poweredforpatients.org.

Powered for Patients is grateful to FEMA and USACE leaders for the valuable information they’ve shared that enabled Powered for Patients to provide this initial report. Their tireless work and that of their federal colleagues, along with the private sector contractors mobilized by the Defense Logistics Agency, is an excellent reminder that effective disaster planning and response continues to be rooted in public-private partnership.

On September 19th, Powered for Patients Project Director Eric Cote was invited to join U.S. Representative Frederica Wilson (FL-27) at a Town Hall meeting in North Miami, FL where the Congresswoman addressed the tragic deaths that occurred earlier that week at the Hollywood Hills Rehabilitation Center. The heat-related deaths of more than a dozen elderly residents resulted from the loss of power to the facilities’ air conditioning system which was not connected to emergency power.

The Congresswoman announced the formation of a Task Force to ensure that a similar tragedy would never occur again. At her Town Hall meeting, the Congresswoman asked Cote to speak about the work of Powered for Patients how it could help advance the mission of the Congresswoman’s newly formed task force.

As part of her continuing work to address the nursing home deaths, Congresswoman Wilson will be hosting a field hearing in North Miami of the House Transportation and Infrastructure Subcommittee on Economic Development, Public Buildings and Emergency Management on Thursday, October 19th. This Congressional subcommittee has oversight responsibility for FEMA. The Congresswoman has asked Powered for Patients to provide testimony for this hearing.

September 15, 2017 – Powered for Patients addressed the emergency power requirements for nursing homes today following the tragic death Wednesday of eight patients at a Hollywood, Florida nursing home after the loss of the facility’s air conditioning.

Early media reporting about this incident included some incorrect and contradictory information about emergency power requirements for nursing homes. Powered for Patients Project Director Eric Cote noted that there are no State of Florida requirements or federal requirements in place today that require nursing homes or hospitals to have air conditioning systems connected to an emergency power source. While this is an optimal best practice, this won’t be a requirement until November 2017 when the federal government’s new emergency preparedness requirements for healthcare facilities accepting Medicaid and Medicare reimbursements take effect.

Among the new federal rules is a requirement that hospitals, nursing homes and long-term care facilities be able to maintain safe temperatures when utility power is lost. It is expected that most facilities will comply with this new requirement by connecting air conditioning systems to emergency power.

“The loss of life in the Hollywood, FL nursing home, currently attributed to lack of air conditioning, is not a new threat to patients following hurricanes,” said Cote. “Among the painful lessons learned after Hurricane Katrina was the potentially deadly impact lack of air conditioning can have on elderly or compromised patients when power outages extend for days. The new federal requirements will better protect patient health when extended power outages can turn heat and humidity into deadly threats.”

Currently, emergency power is required for nursing homes and long-term care (LTC) facilities if the nursing home/LTC-facility has an electric-operated fire suppression system, an elevator or any life support equipment for patients. Egress lighting is also required to have a backup power source. The source of emergency power used by nursing homes to meet these backup power requirements does not have to be a generator if other sources of alternative power exist. In the case of egress lighting, batteries can generally meet the emergency power need. However, in the majority of cases, generators are used to meet these emergency power requirements relating to fire suppression systems, life support equipment and elevators.

The facts Cote shared with media outlets were confirmed with leading experts on these matters, including a senior official with the National Fire Protection Association (NFPA), which authors the key fire and life safety codes that govern generator requirements for healthcare facilities. Cote also spoke with an official from the Florida Health Care Association, which represents many of Florida’s nursing homes and long-term care facilities.

In advance of the new federal requirement, Cote urged nursing homes and long-term care facilities to consider other steps to ensure patient comfort and safety, including:
• If a facility’s normal emergency power system doesn’t currently have the capacity to support operation of the air conditioning system, consider modifications to the facility’s electrical system to enable installation of temporary portable generators to support operation of the air conditioning system.
• Carefully follow emergency power system checklists to ensure optimal operations of emergency power systems before, during and after disaster. This will be especially important if additional generator capacity is added to cover some or all of the facility’s air conditioning system. This checklist is available in the appendix of Protecting Patients When Disaster Strikes, the Powered for Patients playbook on safeguarding emergency power.
• Determine in advance of a disaster who you can contact in government and at your utility to alert them to any mechanical threat to emergency power or problem accessing generator fuel following a disaster. This early warning gives government an important head start in helping to avert the loss of emergency power and it provides utilities the opportunity to modify prioritized restoration plans.
• Ask your generator service and fuel providers to be in contact with local emergency management officials to get assistance if storm damage or lack of fuel hinders the ability of these service providers to get to your facility to make repairs or provide refueling.

September 6, 2017 – Powered for Patients has urged those in Hurricane Irma’s path to heed the tragic lesson from a Hurricane Harvey-related death attributed to power loss.

According to a September 4th article in the Houston Chronicle, an elderly woman died in her Santa Fe home on Saturday, August 26, after her oxygen tank failed when the electricity went out. The Chronicle reported that another woman died in Texas City after she was unable to get dialysis during the storm and flooding. The article citied reports from Orange County officials who said four of the county’s nine deaths were elderly people and possibly related to a power outage.

“The tragic death in Texas of an at-risk citizen who lost the use of her electric-powered medical device when the power went down is a sad reminder for other patients of the critical importance of addressing emergency power needs before disaster strikes,” said Eric Cote, project director for Powered for Patients. “As Hurricane Irma threatens Florida, it’s vitally important for citizens dependent on life sustaining, electric-powered medical equipment to prepare now.”

Among Powered for Patients’ recommendations for at-risk citizens in Irma’s path relying on electric-powered medical equipment in their homes:
• Fully charging the equipment’s batteries before power is lost.
• If you don’t have a backup battery and can secure one or more, do so and ensure that they remain fully charged.
• Identify a source of emergency power where equipment could be plugged in or backup batteries can be recharged. Possible sources of emergency power include neighbors with generators, local public safety facilities, businesses or shelters.

For dialysis patients who routinely use dialysis centers, Powered for Patients urges these patients to contact their facility now to discuss options that may include arranging dialysis ahead of schedule.

Powered for Patients is also recommending that public officials, hospitals and utilities use the federal government’s emPOWER map ahead of Irma’s landfall to better anticipate the needs of electricity dependent citizens. The emPOWER tool was developed by the U.S. Department of Health and Human Services to provide officials with a better understanding of the number of at-risk citizens in a community who rely on electric-powered medical equipment. The emPOWER tool helps officials better understand the types of emergency resources that may be needed in an emergency and enables hospitals, healthcare coalitions and first responders to anticipate and plan for a surge in assistance requests and demands for care during a prolonged power outage or other emergency.

The emPOWER tool can also help local electric companies identify the areas that will require prioritized power restoration to protect health and save lives. Community businesses and civic organizations can use the data to identify ways to provide support to the community in an emergency, such as providing access to power to help individuals recharge their batteries.

To help facility managers at hospitals and other critical healthcare facilities safeguard emergency power systems in advance of Irma, Powered for Patients has posted Protecting Patients When Disaster Strikes on its website. The playbook includes a detailed checklist in its appendix that facility managers can use before, during and after disaster to safeguard emergency power.

As part of its coverage of nursing home fatalities in Hollywood, Florida, the Washington Post interviewed Powered for Patients Project Director Eric Cote to address current requirements for connecting air conditioning systems to an emergency power source in nursing homes. In the article, Cote notes that federal requirements for hospitals and nursing homes to maintain temperatures during power losses won’t take effect until November 2017.

In the aftermath of Hurricane Irma, Powered for Patients Project Director Eric Cote conducted media interviews to address emergency power challenges, including those at the Hollywood, Florida nursing home where eight residents died after loss of power led to the failure of the facility’s air conditioning system.

The DHS-funded Stakeholder Engagement Initiative launched by the Rhode Island Emergency Management Agency (RIEMA) and Powered for Patients in October 2015 is completed and will help set the stage for similar initiatives in other states. Key state stakeholders involved in the project have included the Rhode Island Department of Health; the Rhode Island Office of Energy Resources; National Grid, the state’s primary electric utility; and the Hospital Association of Rhode Island. Several federal agencies have been active participants including FEMA, DHS, and HHS.

After more than a year of stakeholder meetings, emergency power system vulnerability assessments and strategic planning, a key outcome of the initiative is the comprehensive 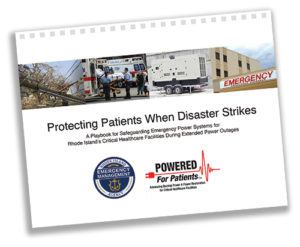 The Playbook details the key responsibilities of stakeholders across a four-phase planning and operational continuum to safeguard emergency power systems and expedite power restoration.

The Playbook also introduces new protocols to provide an early warning to state officials when hospital generator power is threatened during a disaster. These new protocols are expected to become a national model for enhancing situational awareness of emergency power system status during disasters.